In articles and discussions about monorepos, there's one frequently alleged key benefit: atomic commits across the whole tree let you make changes to both a library's implementation and the clients in a single commit. Many authors even go as far to claim that this is the only benefit of monorepos.

I like monorepos, but that particular claim makes no sense! It's not how you'd actually make backwards incompatible changes, such as interface refactorings, in a large monorepo. Instead the process would be highly incremental, and more like the following:

This blog post describes the level generator for my puzzle game Linjat. The post is standalone, but might be a bit easier to digest if you play through a few levels. The source code is available; anything discussed below is in src/main.cc. 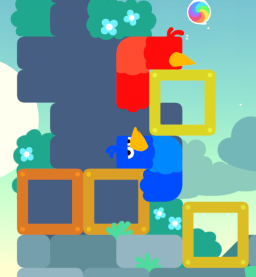 A couple of months ago I finally had to admit I wasn't smart enough to solve a few of the levels in Snakebird, a puzzle game. The only way to salvage some pride was to write a solver, and pretend that writing a program to do the solving is basically as good as having solved the problem myself. The C++ code for the resulting program is on Github. Most of what's discussed in the post is implemented in search.h and compress.h. This post deals mainly with optimizing a breadth-first search that's estimated to use 50-100GB of memory to run on a memory budget of 4GB.

There will be a follow up post that deals with the specifics of the game. For this post, all you need to know is that that I could not see any good alternatives to the brute force approach, since none of the usual tricks worked. There are a lot of states since there are multiple movable or pushable objects, and the shape of some of them matters and changes during the game. There were no viable conservative heuristics for algorithms like A* to narrow down the search space. The search graph was directed and implicit, so searching both forward and backward simultaneously was not possible. And a single move could cause the state to change in a lot of unrelated ways, so nothing like Zobrist hashing was going to be viable.

A back of the envelope calculation suggested that the biggest puzzle was going to have on the order of 10 billion states after eliminating all symmetries. Even after packing the state representation as tightly as possible, the state size was on the order of 8-10 bytes depending on the puzzle. 100GB of memory would be trivial at work, but this was my home machine with 16GB of RAM. And since Chrome needs 12GB of that, my actual memory budget was more like 4GB. Anything in excess of that would have to go to disk (the spinning rust kind).

There was a bit of discussion on HN about data representations in dynamic languages, and specifically having values that are either pointers or immediate data, with the two cases being distinguished by use of tag bits in the pointer value:

If there's one takeway/point of interest that I'd recommend looking at, it's the novel way that Ruby shares a pointer value between actual pointers to memory and special "immediate" values that simply occupy the pointer value itself [1].

This is usual in Lisp (compilers/implementations) and i wouldn't be surprised if it was invented on the seventies once large (i.e. 36-bit long) registers were available.

I was going to nitpick a bit with the following:

The core claim here is correct; embedding small immediates inside pointers is not a novel technique. It's a good guess that it was first used in Lisp systems. But it can't be the case that its invention is tied into large word sizes, those were in wide use well before Lisp existed. (The early Lisps mostly ran on 36 bit computers.)

It seems more likely that this was tied into the general migration from word-addressing to byte-addressing. Due to alignment constraints, byte-addressed pointers to word-sized objects will always have unused bits around. It's harder to arrange for that with a word-addressed system.

But the latter part of that was speculation, maybe I should try to check the facts first before being tediously pedantic? Good call, since that speculation was wrong. Let's take a tour through some early Lisp implementations, and look at how they represented data in general, and numbers in particular.

Why PS4 downloads are so slow

Game downloads on PS4 have a reputation of being very slow, with many people reporting downloads being an order of magnitude faster on Steam or Xbox. This had long been on my list of things to look into, but at a pretty low priority. After all, the PS4 operating system is based on a reasonably modern FreeBSD (9.0), so there should not be any crippling issues in the TCP stack. The implication is that the problem is something boring, like an inadequately dimensioned CDN.

But then I heard that people were successfully using local HTTP proxies as a workaround. It should be pretty rare for that to actually help with download speeds, which made this sound like a much more interesting problem.

The mystery of the hanging S3 downloads

A coworker was experiencing a strange problem with their Internet connection at home. Large downloads from most sites worked fine. The exception was that downloads from a Amazon S3 would get up to a good speed (500Mbps), stall completely for a few seconds, restart for a while, stall again, and eventually hang completely. The problem seemed to be specific to S3, downloads from generic AWS VMs were ok.

What could be going on? It shouldn't be a problem with the ISP, or anything south of that: after all, connections to other sites were working. It should not be a problem between the ISP and Amazon, or there would have been problems with AWS too. But it also seems very unlikely that S3 would have a trivially reproducible problem causing large downloads to hang. It's not like this is some minor use case of the service.

If it had been a problem with e.g. viewing Netflix, one might suspect some kind of targeted traffic shaping. But an ISP throttling or forcibly closing connections to S3 but not to AWS in general? That's just silly talk.

The normal troubleshooting tips like reducing the MTU didn't help either. This sounded like a fascinating networking whodunit, so I couldn't resist butting in after hearing about it through the grapevine.

I don't want no 'wantarray'

A while back, I got a bug report for json-to-multicsv. The user was getting the following error for any input file, including the one used as an example in the documentation:

The full facts of the matter were:

It's a bit of an odd and non-obvious string though, unlike FIXME and TODO. Where did this convention come from? I did a little bit of light software archaeology to try to find out. To start with, my guesses in order were:

I wanted to compute some hash values in a very particular way, and couldn't find any existing implementations. The special circumstances were:

Given the above constraints, it seems obvious that doing multiple keys in a batch with SIMD could speed thing up over computing each one individually. Now, typically small data sizes aren't a good sign for SIMD. But that's not the case here, since the core problem parallelizes so neatly.

After a couple of false starts, I ended up with a version of xxHash32 that computes hash values for 8 keys at the same time using AVX2. The code is at parallel-xxhash.

I've been writing ring buffers wrong all these years

So there I was, implementing a one element ring buffer. Which, I'm sure you'll agree, is a perfectly reasonable data structure.

It was just surprisingly annoying to write, due to reasons we'll get to in a bit. After giving it a bit of thought, I realized I'd always been writing ring buffers "wrong", and there was a better way.